The best and brightest in advanced transport technology assembled in the Tonsley Innovation District this week for the first ITS Australia Business Networking event of 2022.

Hosted by SAGE Group, the event showcased the innovative transport technologies being developed in South Australia and deployed across Australia and around the world.

SAGE Group Managing Director and Chief Executive Officer, Adrian Fahey welcomed the more than 100 people in attendance, highlighting the critical role that ITS plays in delivering greater accessibility in transport.

“SAGE are working on technology that is delivering a smarter future and a better world, and what better example of illustrating how we’re doing that, than in the space of transport, and more specifically – ITS – that we’re showcasing tonight,” he said.

“What we’re really proud of is the impact that we have on the community.

“The work that we’re doing, together with our partners, is delivering safer travel, more environmentally sustainable, and above all, making transport accessible to all.”

Following some exciting ITS updates from the President of ITS Australia, Dean Zabrieszach, SAGE Group Head of Smart Cities and Future Mobility, Damian Hewitt, and Professor Rocco Zito of Flinders University – attendees were able to take a tour of SAGE’s key transport offerings.

What we’re really proud of is the impact that we have on the community.” – SAGE Group MD and CEO, Adrian Fahey

The tour offered a snapshot of SAGE’s transport sector, featuring five different presentations of ITS and related technologies.

Keep reading for some of the highlights from the evening.

First up on the SAGE Technical Tour was SAGE Group’s newest acquisition, Addinsight.

Used by every road authority across Australia and with an established presence in New Zealand, Addinsight captures and analyses data on travel times between any two points where beacons are installed on the road network.

“One of the key features of Addinsight is its incident detection capability,” James said.

“The system measures travel time on road networks, and, over time – through machine learning algorithmsandpattern-matching processes – starts to learn what travel time to expect at a particular time of day.

“Addinsight factors in irregular or infrequent events such as public holidays, school holidays, days of the week, seasons, and more, allowing the system to ignore recurring congestion – it’s all about finding those abnormalities.”

Unlike most incident detection technologies, Addinsight can detect incidents on the full arterial network, not just motorways.

…Through Addinsight’s Smartphone app, road users can get a spoken alert to warn them of upcoming delays.” – Addinsight Product Manager, James Cox

“When the system picks up an incident, we have field hardware that can broadcast messages – and through Addinsight’s Smartphone app – road users can get a spoken alert to warn them of upcoming delays,” James said.

If you missed the live demonstration, request a demo online today!

SAGE’s Sam Woods and Fouzhan Amin Kianoush in front of the SAGE Edge wall as the devices undergo FAT. 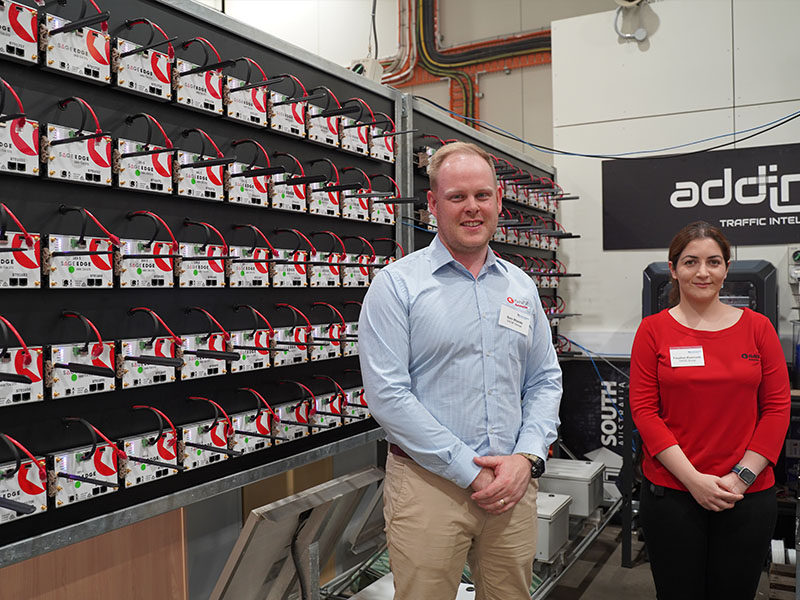 Sam and Fouzhan spoke about the multitude of ways SAGE Edge is used across the business, including working alongside Addinsight.

“The SAGE Edge is a means of getting data through to Addinsight, feeding the travel time information through to the system via Bluetooth and Wi-Fi detection,” Sam said.

The SAGE Edge devices are Factory Acceptance Tested (FAT) in SAGE’s Advanced Manufacturing Facility, ensuring they are working safely and efficiently, before being deployed in the field.

Christian spoke about how SAGE is offering road networks the capability to configure a ‘green wave’ for high priority traffic – allowing an automated system to ease congestion.

This can be achieved by integrating the existing system used by many road networks – Sydney Coordinated Adaptive Traffic System (SCATS) – with Addinsight to unlock greater visibility for smarter decision making.

SAGE’s Christian Chong-White illustrating how SCATS can be used alongside Addinsight to ease traffic congestion. 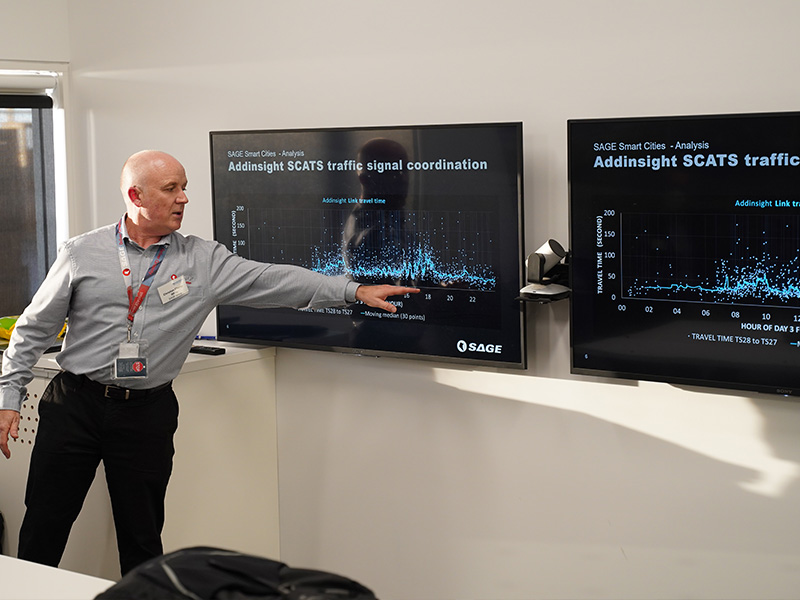 “The beauty of integrating the two systems and seeing travel time is that you can achieve a finely tuned configuration and a well-working system,” Christian said.

“This can inform the system and have the system optimise itself as well.”

Phase I of the FLEX AV trial involved developing an autonomous vehicle and deploying it at Tonsley on a route connecting Flinders University with a nearby train station for a first-mile last-mile solution.

“In this trial, we were dealing with one of the biggest issues in the transport industry: how do you get an autonomous vehicle through a dynamically changing environment – an intersection,” George said. 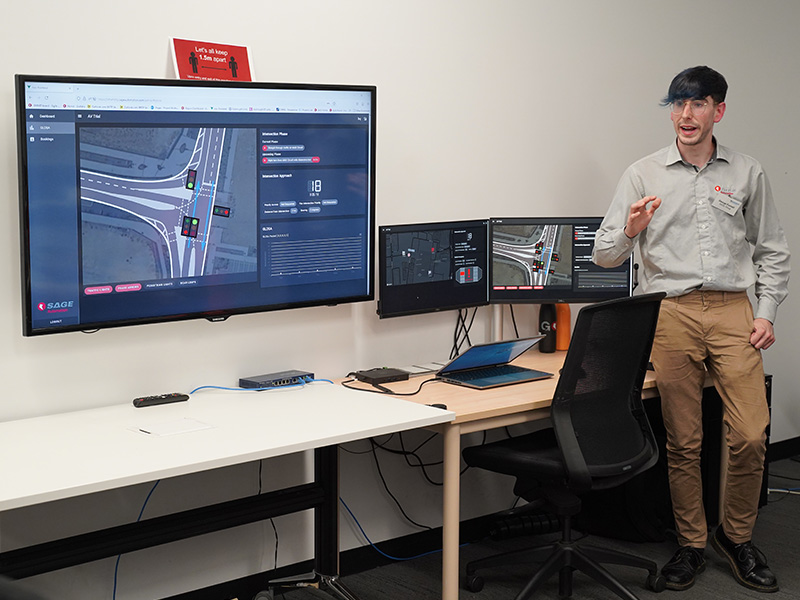 “As the vehicle approaches, there’s no understanding of the intersection, no idea if there’s a green light, red light, the speed it should be going at – so the vehicle has traditionally been programmed to just come to a stop regardless.”

…We were dealing with one of the biggest issues in the transport industry: how do you get an autonomous vehicle through a dynamically changing environment.” – SAGE Systems Engineer, George Funnell

This project includes implementing a Green Light Optimal Speed Advisory (GLOSA) – to allow the AV to seamlessly pass through an intersection safely, and without stopping, along a predetermined route.

This phase also includes trialing the AV without a chaperone on board, to truly test the boundaries of a ‘driverless’ vehicle.

George is involved in numerous ITS projects with SAGE, and recently won the 2021 ITS Australia Young Professional Award, in part, thanks to his work in the AV space.

Providing a comprehensive overview of what the Smart Cities team have been up to was SAGE’s Smart Cities Technical Lead, Ashby Martin.

“Smart Cities for us is three things: it’s using data to make the best decisions, making the most efficient use of resources, and providing really good public experiences,” Ashby said.

Among many other projects, the Smart Cities team has been working on upgrades to SAGE’s Digital Kiosks, which provide real-time public transport schedules, information on interruptions, and much more.

SAGE’s Ashby Martin demonstrating how to use the SAGE Digital Kiosk.

“Originally designed for an AV Trial in Holdfast Bay, we’ve now reached the third generation of our SAGE Kiosks,” he said.

“What we’ve learned over time is to understand how it looks in the field, and to see people operating them in a real-life situation, to better understand the accessibility requirements.”

We hope you enjoyed this snapshot of February’s ITS Australia event. It was great seeing plenty of familiar faces, and some new ones as well.

The presenters were thrilled to answer plenty of challenging questions from the engaged participants and showcase a few of the exciting ITS projects in progress around Australia.

If you’re interested in learning more about the ITS solutions SAGE Group is delivering, check out our transport and smart cities newsletters.